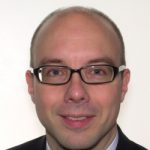 as shared on Whatsapp: Please add an introduction, conclusion, and reflect on how to handle and integrate the questions that you previously had, as they are still very important.

When you finished this work, you may upload it to the journal. Please advise me accordingly. I will have a final look …