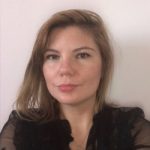 The Global Democracy stressing out under the Pandemic cords