Insights on African Child Soldiers and their Living Paradox

On September, 5th, 2021 – WMO members from 5 continents joined a common conference call under the project name of WMO Gathering. The event was chaired by Daniel Erdmann and moderated by Yousra Hasona. Prof. Chrys Kiyala, from Bandundu University, attended the meeting being the speaker.

Prof. Kiyala was kind enough to share with us his first-hand experiences and insights from his long-term field of research. The topic for this WMO Gathering was: ‘Child Soldiers and Restorative Practice‘.

The purpose of this event summary is not to offer Prof. Kiyala’s content once again, but more likely to bring together selected reflections of some attendees. As we all witnessed the high-level content that was delivered by the speaker, we would like to give the same level of attention to the audience’s perspectives. Therefore, we will now learn more about such points of view by having a look at the attendee’s statements:

Tina Jones breaks the ice on a very emotional level by saying: ‘Listening to Prof. Kiyala describe the inhumane conditions and violence that child soldiers in the Republic of Congo are subjected to, was jarring and horrifying. These are children. I could not imagine their pain after surviving mental and physical abuse, abduction, rape and other unspeakable violence as a bystander or even worse as a child-offender holding the gun that they are then subjected to more trauma being ostracized and displaced in their communities or shamed by their own families. Forgiveness and acceptance is so desperately needed when a child soldier returns home to start the process of healing and redemption.’

Nana Amma Adjovu expressed her concern by sharing that ‘there is no long-term continuity plan to check whether rehabilitation and integration measures for child soldiers have worked.‘

Her statement describes best the critical situation that all engaged parties of such rehabilitation projects face. Even though Child Soldiers are not a recent phenomenon, the projects to reintegrate Child and Youth Soldiers into society are commonly just starting. Thereby, these projects and researchers are currently creating their own case studies to learn from. This is one of the reasons why short-term reactions to socio-psychological findings during these rehabilitation processes are highly important. These projects intend to minimize the pain and to maximize a potential future for the ex-soldiers.

Bernie Bain stated that ’it was commendable to hear that Restorative Adjustment and Rehabilitation is a focus in dealing with ‘Child Soldiers.’ That there are alternatives: to enhance child wellbeing and the promotion of educational and vocational programs for these children.’

To my understanding, Bernie Bain was not really aware of the topic and perfectly confirms what …

Victor Berger adds by saying that he: ‘is afraid the West, generally, demonstrates extraordinary insensitivity and, dare I say, disinterest. As much as there are myriad of causes swirling around the world in the main, those who engage in them do so with very narrow perspectives, little beyond their own immediate self-interest and pursuit of self-gratification.’

Assuming that peace supportive action could be initiated if we only knew about the situation in full, we should ask ourselves who actually generates a benefit out of the fact that so little information on this topic is communicated in the western world, and the conflicts in the potential areas continue to exist. Obviously, the fact that child and youth soldiers join actively such war zones, make the conflict grow and sustain. So, what are the consequences that a destabilized country or area faces? I suggest that all kinds of price levels decrease and are kept at a minimum, including natural resources such as Cobalt, Lithium, etc.

Building the bridge from the sustainable support of conflict and its consequences to the topic of restorative practice and reconciliation, …

Eloise Zeume makes us know that the point that caught her attention was: ‘that restorative justice was implemented in the eastern province of the Democratic Republic of Congo concerning the child soldiers’ perpetrators of crime. Prof. Kiyala mentioned that within the framework of restorative justice in the community, the locals use forgiveness, compensation, and other practices such as cultural rituals, the alternative to imprisonment to maintain the peace in the community and to preserve the significant interest of the child, as stated in the convention on the rights of the child. All those practices and actions are perfect for maintaining peace in the community in a social view. Also, from the psychological point, forgiveness can powerfully heal the child soldiers’ mental. However, from a legal point of view, where crime was committed, must be punishment. So, I asked myself whether preserving the child’s interest in such a situation will not encourage other child soldiers or even the same perpetrator to commit further atrocities. And how far will the alternative to imprisonment of child soldiers for the crime committed be?

Another point is the psychological trauma and sufferings of children soldiers. When I listened to Prof. Kiyala, I had an impression there is no particular system put in place by the Congolese government to take good care of those children, especially for the long-term care and insertion into the society. In this perspective, what is the future of child soldiers in general and in the East Province of the Democratic Republic of Congo?’

And yes, as previously stated, there is no long-term study or guideline on how to handle such a situation and reintegration process in the most beneficial way. Accordingly, we do not know yet, the impact of rehabilitation camps, the use of traditional reconciliation systems, and the possible lack of psychological trauma care.

What we can say is that the awareness and willingness to make use of local systems of social healing may have a positive impact on rehabilitation. Commonly known practices are deeply rooted in a cultural mindset and may have a deeper impact on the individual than imported practices only.

Sokfa John outlines the importance of: ’the use of indigenous community accountability and reconciliation systems are actually very effective in the context of transitional justice. They offer a more comprehensive and dynamic way to address the crimes, reintegration, rehabilitation of former child soldiers as well as achieve justice beyond how it is understood and pursued in the international criminal justice system. These indigenous systems do not only demonstrate a contextualization of justice, but also offer resources for continuous interrogation of the notion of justice in international law.’

Anne Kristine explains once more the importance of being flexible and of adopting the strategies and methods to the actual needs by saying: ‘Although Restorative Justice has universal principles, there is no single universally applicable system; it is thus not merely helpful but even essential to take into account the local context and specificities of culture and tradition etcin designing effective Restorative Justice models. Restorative Justice promotes peace and healing mechanisms but it cannot be only dictated from the top down, it needs to be (also) a grassroots movement, involving all members of the community, in a bottom-up approach. Furthermore, the event highlighted the importance of listening to the child’s voice, to always have that at the back – or better: at the forefront – of our minds when legislating.’

Prof. Kiyala sums up his proper findings while giving this lecture: ‘From my vantage point, the conference was very enriching in terms of attention paid to it by the participants, and the pragmatic and discursive nature of their interventions.

There were intriguing questions that opened up our research horizons and raised new interests in specific issues that need to be considered when applying restorative justice approaches for child soldiers in conflict zones. These include:irls for two weeks. The benefits of RJPCs included:

To me, it was once again an eye-opener to hear Prof. Kiyala explaining that children and adolescents join such forces, not only by being kidnapped but also because of the motivation to find themselves in better living conditions than being on their own. And this fact also builds a heart-moving scenario, namely that many ex-soldiers stay in the rehabilitation camps for years, because they have no families to return to. Bringing the complexity of this content on the point, especially at the moment of a potential reintegration and act of forgiveness, is the question of who actually remains to be guilty, the Child Soldiers or the recruiter.

Tina Jones sums it once more up by sharing: ‘The Restorative Justice initiatives implemented by Dr. Kiyala to improve the lives of these child soldiers, their families and communities is truly remarkable. Dr. Kiyala‘s work provides the opportunity for healing, forgiveness, reparations and the reintegration of child soldiers back to their communities. That is a gift too so many.’

While many questions stay with us for further reflection, I would like to give credit to all the attendees, to the moderator, and to the speaker –  it remains to be my personal wish to hope that such findings will have a positive impact on our daily routine and that the fact that we all came together in order to exchange on this topic, and to learn from each other’s experiences and insights, may support you on your path towards sharing a glimpse of hope and to initiate peace on a global level.

Thank you for your attention and obtain more information on our upcoming event right here! 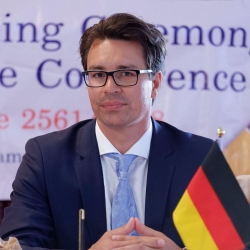